Why the nuthatch is a sight to behold

With its dashing black eye stripe and unusual agility, the little nuthatch is a sight to behold, says Graham Appleton

One of the distinguishing features of nuthatches is that they can climb down trees — the only British bird that can do this. Woodpeckers and treecreepers work their way up the trunk, hunting for insects under the bark, then fly to the base of another tree to start again, but nuthatches can descend a tree headfirst.

It is one of those funky facts that birdwatchers like but one that you do not need to know in order to identify a nuthatch. In size, they are a bit bigger than a great tit, with greyish-blue on the back, a pinkish-russet front and a black eyestripe, almost bandit-like in appearance. If you see a pair together, the male is the one with a reddish-chestnut “brush stroke” just below where the wing folds on to its side.

Nuthatches are increasing in number

These smart little nuthatches have been doing well. According to figures from the British Trust for Ornithology (BTO), numbers have risen massively since 1967; from about 70,000 pairs to a current total of 220,000 pairs. Birds have been taking full advantage of new forestry plantations, warmer winters and the food that many of us provide in our gardens.

As well as increasing in numbers, there has been a large range expansion. In the relatively short period between the 1981-84 Winter Atlas and Bird Atlas 2007-11, the range of the species increased by more than one-third. Much of the expansion has been in Scotland, which was not colonised until 1989.

The map from Bird Atlas 2007-11, published by the BTO in partnership with the Scottish Ornithologists’ Club and BirdWatch Ireland, shows how the expansion has taken place. 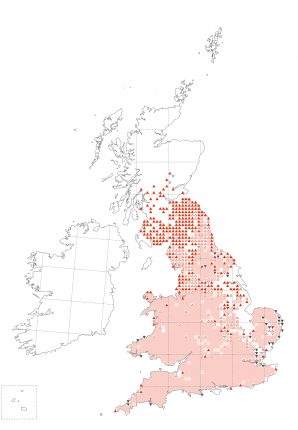 The map from the Bird Atlas 2007-11, published by the BTO, shows how nuthatch populations have altered over the past few decades

Pink areas were already occupied in 1968-1972, small red triangles indicate additional records in 1988-1991 and bigger red triangles show more recent colonisations, as discovered in the breeding seasons between 2008 and 2011. There were a few losses (black triangles) in eastern counties of England. In the past few years, there have been several records of nuthatch from north of the Great Glen, showing that range expansion is continuing in Scotland. 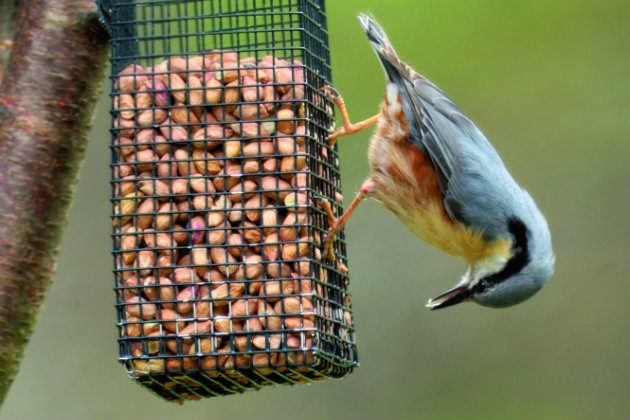 Nuthatches will take peanuts from a feeder to save for later

February is a good month to find a nuthatch, as they are noisy at this time of year and the trees are bare. Listen out for some strange whistles from near the top of a tree when you are out for a walk and stand a while, scanning the branches, until the bird moves. For some lucky people, nuthatches will be regular visitors to feeders in gardens. If they can, they will try to take seeds, whole nuts or large pieces of nut and fly off to hide them in secret places, caching them for later use should the weather become bad or the garden owner neglects to refill the feeders.

“A bird had flown in and out of a window to hide peanuts under a pillow, causing a bit of a surprise come bedtime”

One of the people I used to work with at the BTO in Norfolk had trouble opening her garage door one morning. Upon inspecting the lock, she found that a nuthatch had chosen to fill the keyhole with peanuts. On another occasion, what was probably the same bird had flown in and out through an open bedroom window to hide peanuts under a pillow, causing a bit of a surprise come bedtime. 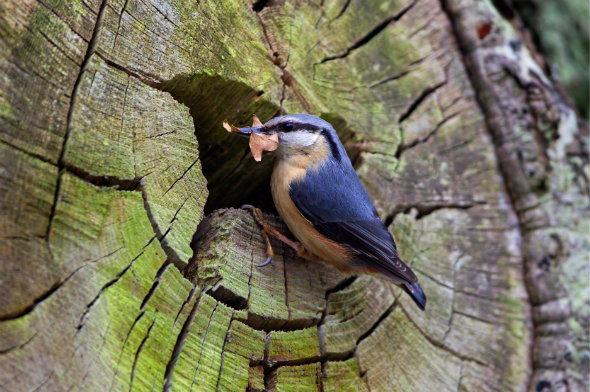 Though the nuthatch has a sharp bill, it cannot dig its own nesting hole, instead relying upon the activities of woodpeckers or looking for natural holes or crevices. The entrances to these potential nest sites are often too big for nuthatches, so they remodel the entrance hole by plastering it with mud to make sure that bigger birds cannot get in.

One of the potential competitors for nest sites is the ring-necked parakeet. There has been a suggestion that Dutch nuthatches are losing out to parakeets but that has not been shown to be a problem in the UK, as yet. If there is one beak that might have the potential to remove the “concrete” plugging the entrance to a nuthatch nest, my money would be on a parakeet.

With natural holes and old woodpecker nests in limited supply, nuthatches will readily take to the same sort of nesting boxes that blue tits and great tits use. They create beautiful, tidy nests out of neatly arranged, dried leaves and pieces of bark, then bring in mud to plaster around the inside of the entrance hole to deter predators. A female nuthatch typically lays a clutch of six to eight eggs, brooding them for 16 days and feeding the youngsters for 24 days.

If you already have or plan to put up one or more nest boxes, you can become part of a national survey into the annual outcomes from nesting attempts — the BTO ’s Nest Box Challenge. By reporting on the number of eggs laid, the number that hatch and the number of youngsters that fledge, you will be part of an annual monitoring scheme that helps scientists to understand the relationship between changes to weather patterns and annual productivity. Some people are happy to look inside boxes to gather this information, following the BTO’s guidelines to minimise disturbance, but others who have nest-box cameras can spy on the activities of their lodgers on a daily basis. 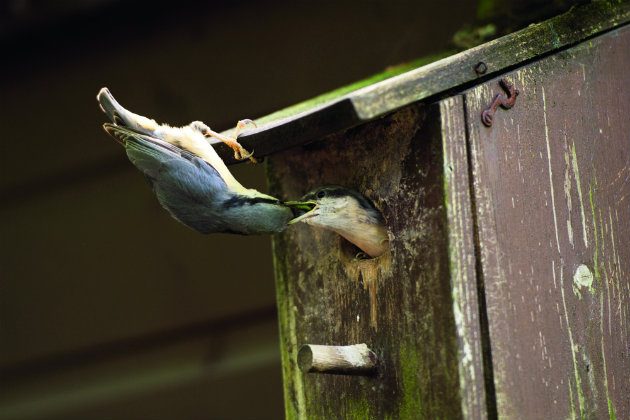 Put up a nest box for nuthatches and become part of the BTO’s national survey, the Nest Box Challenge

One BTO volunteer who got involved in the Nest Box Challenge was really pleased when a pair of nuthatches moved into a box in which he had fitted a camera. The bird made the nest and started doing the plastering but covered over the camera in the process. Delight turned to frustration. Imagine trying to chip the dried mud off the camera at the end of the summer. I wonder if anyone warned him that nuthatches quite often use the same box in subsequent years?

An exotic sight in the capital, the ring-necked parakeet population has already escaped the boundary of the M25. Is this…