Who shoots geese with a Remington .45?

The Editor of Shooting Times, Patrick Galbraith, takes us on a wander round Europe’s biggest hunting expo – IWA Outdoor Classics 2017. An alternative title for this piece? “The bonkers, the beautiful and the camouflaged…”

“I spent most of my childhood shooting geese with a Remington .45” announced the moustachioed Texan.

I took another sip of my damson gin, which a jolly girl selling tweed skirts on the ‘British game fair’ stand had poured me, and put the pistol down, “the best” apparently “for pig hunting”.

Regrettably, I couldn’t stick around to listen to more tales of toppling the world’s biggest beasts with absurdly inappropriate weaponry, as I had a date to keep with the one of the brightest young things in the world of rifles.

Over at the Rigby stand, the tone was a little different; glasses of scotch lay on the table surrounded by old leather armchairs and a man was playing the bagpipes. The Highland Stalker, which I was there to talk to Marc Newton about, the MD of the company, had been launched only that morning.

The stylish gun draws on Rigby’s illustrious heritage but at £6,000 it is their cheapest rifle to date. In response to popular demand it is also available in a range of calibres to suit the big game hunter and roe stalker alike.

The interview ended and I wandered off amongst the guns. Above the voices of the crowd an electronic drumbeat pounded. The heavy baseline became louder and louder as I made my way through the throng of porky men in camouflage, intimidating women in well-cut fur, and immaculately behaved German hunting dogs.

In the eighth huge room of the colossal expo, the source of music became clear. Men with chiselled faces and bronzed skin, in garish orange Real-Tree and rainwear, strutted across the floor moving their hips in time to the beat.

A large wolf … lying there

Lying there on the ground, inches away from the boar hunting boots sashaying the catwalk, was a large wolf on a worryingly flimsy lead, its silver dappled coat glistening in the artificial light.

The following morning I spoke to a man about wellingtons. I once went out with a girl who claimed they are perhaps the only thing I am truly passionate about.

After much thought, I have decided the subject of the conversation, the Ariat Burford, could be the next big thing in the wellington world. At £145.00 they are remarkably good value, they look almost as well made as Aigles, and just as importantly, they’ve got charming suede trim.

I almost missed my next appointment, over at Blaser, due to falling in love with Franchi’s newest “Beccacia”, on the way, a 26 inched barrelled woodcock gun. After a full quarter of an hour spent stroking the wood and picking the dainty little thing up and putting it down again, I managed to tear myself away, promising I would return.

Compared to the pretty Beccacia, the Blaser F16 looks somewhat utilitarian but it is possibly the most talked about gun of the last few years and as I discussed it with Robert Sajitz, the CEO of the company in the UK, it became clear why. It simply seems to be the most gun you have ever been able to get for your money. Interestingly, at £2,500, a little like the Rigby, it is a mid-priced gun from a traditionally high-end company. 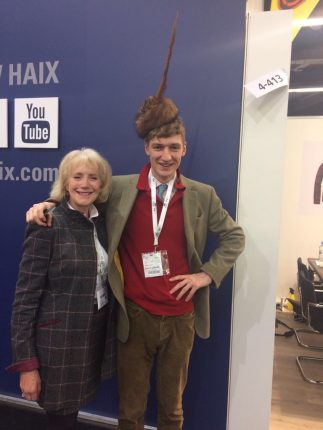 Trying out some hunting hats

I spent the rest of the afternoon rummaging through all the latest sartorial offerings. Unfamiliar boutique French hunting brands stood side by side with the likes of Barbour and stalwarts like Laksen.

A pair of suede Courteney safari shoes have now gone to the top of my shopping list – the last word in safari chic.

That evening I stood, sipping a beer, in front of a film of a Scottish deer-stalking scene. The film morphed into an animation of cross hairs on the beast’s chest which moved right onto the perfect killing point. “Imagine” said Swarovski’s master of ceremonies, “that the hunter would like to move a little closer”. The stalker duly crawled some twenty metres on and raised the rifle again. Futuristically, the cross hairs moved right back onto the killing point, taking full account of the hypothetical cross wind.

This was the launch of the Swarovski dS, the scope that tells you where to aim utilising “digital targeting optics”.

After the presentation was over I turned to a Swarovski employee next to me and asked half jokingly where they draw the line between sport and mechanised killing? “You raise an interesting point” he replied “but surely they said they said the same about moving on to scope after centuries of iron sights”.