What’s best? A family heirloom or a new shotgun?

Given the choice, what would you choose? Shooting Gazette debates the issue … heirloom shotgun or something brand new?

For the last 20 years I have shot with my late father’s 12 bore and, while I wish he was still using it, I wouldn’t dream of doing anything else. Firstly, I suppose I should point out that it doesn’t work terribly well. My father boxed for the RAF. My mother was a ballerina. When it comes to my build, other than the waistline, I take after her. I might add I inherited my father’s dancing skills too. Unfortunately, my father fell on his gun while crossing a dyke and cracked its stock so it can’t be adjusted to fit. And that’s not the only way in which it’s goosed. The whole action, despite the best efforts of one of London’s smartest gunmakers, works itself loose every 250 shots or so, therefore I need to carry a set of turnscrews with me to put it back together again. The chambers are short so it can only take certain types of cartridges and I obviously wouldn’t dream of putting steel shot down its ageing barrels. It hasn’t even ejected properly when it’s hot since cartridge manufacturers started using a new type of plastic, so I need to use paper case jobs.

But I wouldn’t dream of shooting with anything else except my heirloom shotgun. Its surprisingly plain wood was put to my father’s shoulder on shoots up and down the country for a lifetime; its barrels swung through by him on thousands of birds. It shared the glory of the towering singleton folded up with its first barrel and the muttered frustration of the inexplicable missing of the absolute doozy missed with both. He cleaned it as I sat next to him fettling my .410 and, in as far as an inanimate object can contain a bit of the spirit of a person, it does my father.

So I don’t care that it doesn’t look terribly pretty, doesn’t fit, falls to bits with use and means I have to use eye-wateringly expensive cartridges. I’m proud to shoot with my father’s gun, and hope my son will also be in due course. 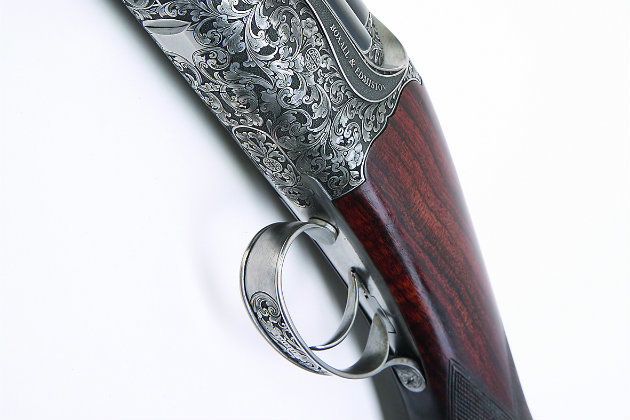 Boxall & Edmiston over and under

Now, I venture you had me down on the old-school side of the fence on this one. Ancient Woodward hammer guns, triumph of Victorian engineering, best in the world, golden age sort of stuff. Well, stuff is right. And nonsense. Put me down for brand spanking, thank you very much.

I have spent years, decades – all my life – shooting with hand-me-downs and cast-offs. I started out with a folding .410 that Harry Churchill had confiscated from a poacher and which was held together with gaffer tape and came with a pair of pliers instead of an extractor. I progressed to a double-barrelled .410 by Alex Henry which I borrowed from a farmer and which turned out to be a badly worn .400 rhino rifle. I still shoot with guns that are more than 150 years old. And yes, they are beautiful. And yes, they come with volumes of history and all the glamour of a bygone era. And they even work just as well as the day they came off the bench. They are fine.

But if you gave me a free rein and a bunch of money I’d be all over the benches of Europe’s finest like a rash.

Purdey’s modern Damascus? Holland’s Royal Sporter. And anything by David McKay Brown. I’d have to wait for the Fabbris and Famars perhaps, so I would pass the time with high-end Berettas, Piottis or Brownings. Too expensive? OK then, not so high-end Berettas. Rizzini round actions and Caesar Guerinis. Modern British – Longthorne or Boxall & Edmiston. Or any of the UK/European collaborations that have been going on lately through William Evans or EJ Churchill or Powells.

The modern gun trade is stuffed to overflowing with the most innovative, exquisite, dynamic and exciting guns the world has even seen and you want to palm me off with something that Grandpa used? Certainly not. I already have his cartridge bag and what remains of his suit, and if buying a new gun has the old boy spinning in his grave at a million miles an hour then we’ll just have to plug him into the mains and claim some kind of feed-in tariff to pay for all these lovely guns.