Buyer’s brief: “I wish to buy a gun for field shooting – a few pigeons, a bit of pest control and the occasional walked-up pheasant day. Also during this summer I shall be sharpening-up my technique with a few clays. Which game guns do you recommend?” Jim Richardson, Bristol.

When people ask for multi-use, most experienced shooters recommend a sporter. Sporters are built to tackle our domestic sporting disciplines and similar targets under the international FITASC rules, all of which try to simulate targets encountered in field shooting.

Most sporters weigh within the odd ounce or two of 7¾lb, which means they are heavy enough to soak up the recoil of 100 targets or more over a day, and the weight makes them steady. They don’t have to be carried over long distances.

Game guns are usually lighter. Many traditional British side-by-sides weigh less than 7lb, which allows them to be carried with ease over a long walked-up day and, compared to clay shooters, game shooters fire fewer cartridges and therefore the effects of recoil are not so bad. Game shooting is also done in autumn and winter, when thick clothing also helps with the recoil of a light gun.

Modern O/U game guns are generally heavier than side-by-sides, and tend to weigh around 7¼lb, which will be a good compromise for Jim’s style of shooting. Such guns are only half a pound or a little more lighter than well-balanced sporters, but over a long day in the field most shooters of average build don’t have a problem.

So, let’s have a look at a trio of guns designed primarily for field shooting, but which will also double as sporters.

The gun in the illustration is the Browning Elite Game, which is really a Grade 3 B525. Jim would be lucky to find a 525 of this specification in his budget, but an extra £200 should be enough if he really wanted a “posh” version . But if he couldn’t find the extra cash that’s not really a problem because there are other 525 game models which he would get for his £1,000, or even less. The only differences will be in the woodwork and the engraving – in other words just cosmetics. The different grades shoot just the same.

The Miroku-built Browning B525 came out in 2003 as the direct successor to the well-loved B425. There was clearly a lot of “don’t repair it if it ain’t broke” philosophy in the design of the new gun because there were no radical changes – a slight re-design in the geometry of the hammers and sears to provide crisper trigger pulls, a more “sculptured” look to the action frame and some improved engraving patterns were the main differences. See the Browning B525 Heritage shotgun at the IWA Trade Show in Nuremburg, Germany. The full B525 range was huge. Through field, sporter and trap gun specifications there were 27 different versions, and if you care to multiply in all the different barrel lengths and grades of finish, and 20-bore options, there was well over 50 different new guns to choose from. It is honestly impossible to tell how many different variations there are on the second-hand racks. So, although the majority of guns were for the competition disciplines,  Jim is sure to find a game gun of the right specification which suits his budget. 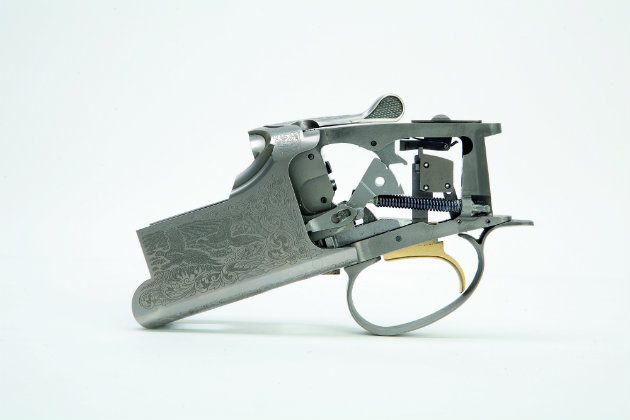 The design is typical Browning: barrels hinge to the action on a full-width hinge pin engaging with a hook on the barrel lump. The lump also incorporates a bite, with which the conventional, low-mounted bolt engages.

All guns have single, selective triggers. Two-piece ejectors are powered by a kicker mechanism mounted on the fore-end iron. All safety mechanisms, even on field models, are manual and barrel selectors are incorporated in the safety thumb button.

The Winchester 101  is one of my guns and one of my all-time favourites. In fact, the only reason this gun doesn’t head my list is that it has not been made since the 1980s, so spares can be hard to find and most examples will have fired many thousands of cartridges.

I found my gun, second-hand, in Jimmy Ling’s gun shop in Suffolk some time in the late 1980s, and I don’t think it had fired more than 500 cartridges from new. To me, it was the find of a lifetime, and quite special because it was paid for by Sporting Gun’s parent company in the era as a long‑service award.

How much is a good example worth? Well, the whole 101 range has something of a cult following and because of this you occasionally see some guns advertised at silly, high prices. Personally, I wouldn’t give more than £600 for a gun in good condition.

The whole 101 series of guns was built for Winchester in Japan by a company called Kodensha, in the city of Tochigi, north of Tokyo. When Winchester departed from its parent company, the Olin Corporation, and joined ranks with Browning, just about the only bad decision it made was to completely disown the 101 series, which had been an international top seller since the 1960s – but that’s gun trade politics for you.

The operating principles of the entire 101 series are very similar to the Miroku-built Brownings, but the handling was – if I dare say it – even better!

Lincoln shotguns first appeared in the 1970s, and were the brain-child of Lincolnshire game shooter David Nickerson. David’s company, Nickersons of Tathwell, used the Lincoln name for the O/Us he imported mainly from Italy, and the side-by-sides which were generally built in Spain. After more than 40 years, Lincoln guns are still with us. Nickerson’s of Tathwell no longer import the guns, but John Rothrey Wholesale has taken over the marque and there is a good selection of guns for both field and clay shooting.

The O/Us are made by an Italian company called FAIR, an acronym for Fabrica Armi Isidoro Rizzini – yet another branch of the Rizzini dynasty – this brother boasting of a 3,000 square metre factory equipped with the latest machine tools.

The Lincoln Elite falls somewhere between a game gun and a sporter in specification. Most examples weigh around 7lb 6oz, which is a nice “compromise” weight that would be ideal for a shooter who wanted just one gun for everything.

The gun is still in production, and as the cheapest version retails at around £1,050, Jim should find an excellent second-hand example well within his budget.

The Elite, like all the Lincoln O/Us, is a typical Italian gun with multichoke barrels, constructed on the Monobloc principle, hinged to a shallow action with stub pins, and a single, selective trigger with the barrel selector built into the safety thumbpiece. Stocks are generally 14¾ inches, and, as well as 12-bore examples, there are 16, 20 and 28-bore versions.