The lurcher – a designer cross-breed dog

A touch of this, a dash of that: lurchers come in a range of “flavours” to suit the working needs of the owner, explains Jackie Drakeford

A gamekeeper once said to me that a lurcher was “any calibre of gun you require”. The lean, light “silent assassin” is a most versatile field dog and probably the oldest known designer cross-breed. There are variations to suit each type of land and each intended task, but all of them are fast and lethal. I think of the lurcher as a fruitcake — some would say a complete fruitcake — and we aficionados use different ingredients according to our own needs.

Whether we want a dog to find and flush, run by day, work with ferrets and nets, run by night down the beam of a lamp, work solo, or bush out and catch quarry as part of a team, there are lurcher types that will be specialists in each and a few that can do it all. Whether you are working over hills, plains, fens, downs, fells, small fields, large open spaces, woodland, moor or marsh, there will be lurchers to suit. Long, short, broken, slape (wiry and water/dirt repellant), rough or smooth-coated, sprinters, stayers, cat-footed, hare-footed, any colour that dogs come in — in no other type of dog are there so many differences but the end product is still instantly recognisable. 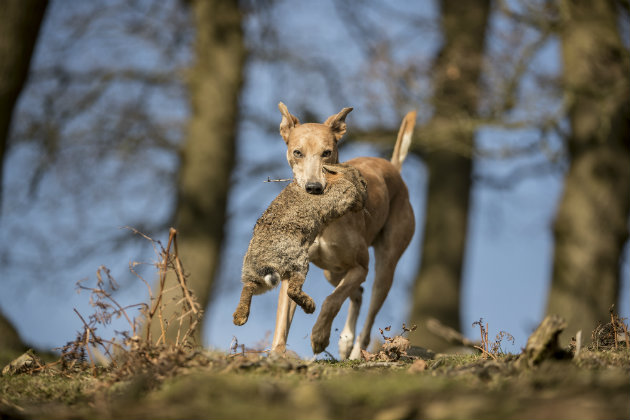 Lurchers are red-hot at dealing with game

While there is a wide choice of breeds used in lurchers, what is equally interesting is the list of breeds that might appear suitable but are rarely used, due mainly to conformation or temperament incompatibilities.

The inherently kind nature of sighthound types balances their predatory skills just so: you don’t want anything with a combative mindset allied with that kind of speed and dentition. Nor do you want dogs that are genetically wired to make a noise, which is why the silent Bedlington is preferred over other terrier breeds. The streamlined silhouette is an essential part of lurcher function, which is why certain other breeds that at first might seem useful prove otherwise. 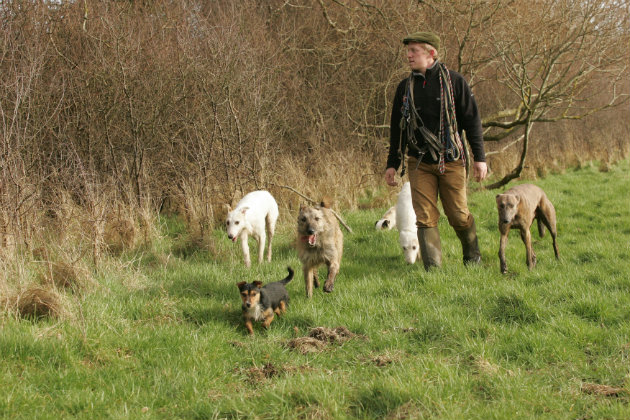 The biddable Labrador, for instance, has great feet and  a superb nose, but also a big head that  I have seen come through five lurcher generations after one outcross. The last thing  a running dog needs is a heavy, broad head. It is hard to find German shepherd dogs with correct body construction, and the better-made Malinois offers difficulties if the guarding temperament comes through, just as the athleticism and good looks of the husky risk being insufficient to balance its intolerant personality. It is hard to find a healthy shape in breeds that no longer include working varieties and hence display conformational exaggeration. No dog can be an athlete unless the body matches the will, and in our overcrowded countryside we must have working dogs that are reliable around stock and willing to return  to the handler when summoned.

Sighthounds are the most results-oriented dogs and therefore training them is a challenge. They do nothing for nothing, will blank anyone who tries to get heavy with them and are difficult to reward because there is little that lights their candle apart from hunting. For the sake of handler sanity, task-oriented breeds such as collies are often crossed into the sighthound mix, and such dogs can be trained to an extraordinarily high level. This is vital because much of their work is done on their own initiative and therefore on trust.

Pure sighthounds and their crosses with each other are for those who love the stratosphere of training challenges, for these dogs work with us not for us and are most unforgiving of handler error. They don’t want to please, they have high standards, long memories and they query everything. These are dogs that can survive without humans — and they know it. If we didn’t have driving licences and opposable thumbs they probably wouldn’t bother with us at all. So when they deign to fall in with our requirements, obey us because they know we can help them do what they have a compelling need to do, choose to be with us because they like us rather than because they need us the way a lesser dog might, it is rather like being knighted.

There is no better dog for “going out to see what there is”. Though they can make admirable roughshooting companions, and plenty can be seen in the beating line, on land where shooting would be inadvisable they are the best accessory unto the fact, red-hot at finding and dealing with game and vermin of every kind, fur and feather, though the Hunting Act has spiked their guns to some extent.

Handling them successfully is quite different from gundog work, for if you ask a lurcher to go into cover the way you would a spaniel and there is nothing in there, they will glower at you and refuse to waste their time. But they have superb noses and the will to use them: if there really is anything in that patch of undergrowth, they will swivel like weathercocks towards it. Did you think only pointers could point? Ears, nose, tail and stance will tell you not only where it is but — to the savvy owner — even what it is. What happens next is down to the handler, for a lurcher that goes into cover is not best placed for chasing whatever comes out of it. If you don’t have a terrier, you may have to wiggle your thumbstick through the thorn, or even step into it and jump about a bit. We have our uses after all.

Pedestrian dog trainers may  have hijacked the term “prey drive”  to mean chasing a ball or shaking  a soft toy, but I promise you nobody has ever seen naked prey drive until they have watched a purpose-bred running dog scorching after its quarry. Even when you are expecting it, even when you have seen it so  many times before, it brings you to  a holding-the-breath standstill of awe and admiration. The same dainty animal that tiptoes round puddles  or baulks at walking through mud  would pelt through the gates of  Hell too fast to catch fire once it has quarry in front of it. And in typical hound fashion, once the deed is done, catch or miss, the dog is calm again.

I make an exception here for lurchers with terrier blood, where once their dander is up it takes a while to come back down again, and if their rag has been lost, you may need some time to find it.


Learning to love the lurcher 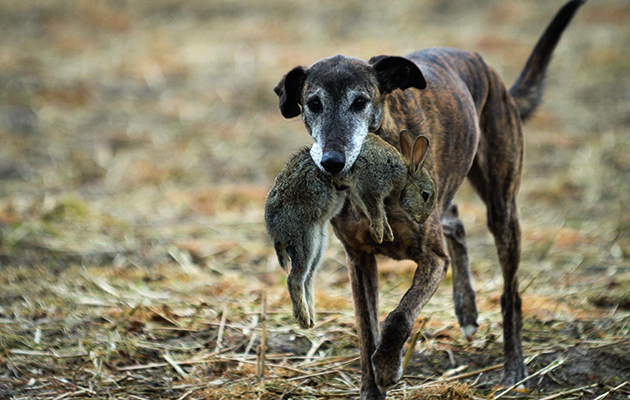 A sceptic is shown a new ferreting method


Will cross-breeds ever rule in the field? 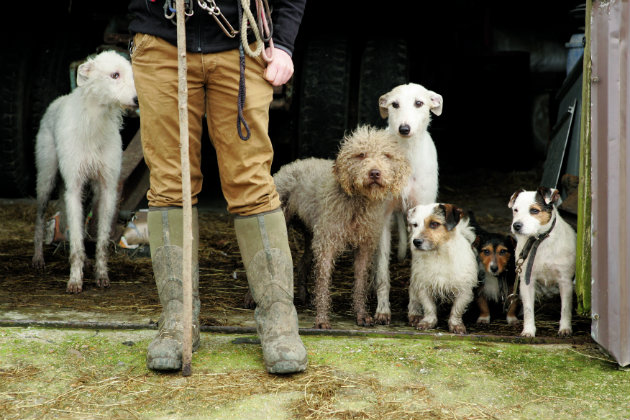 While I appreciate the wealth of pure-bred gundog breeds, I would not hesitate to use a cross-breed working dog if…


The rise of the sprocker spaniel 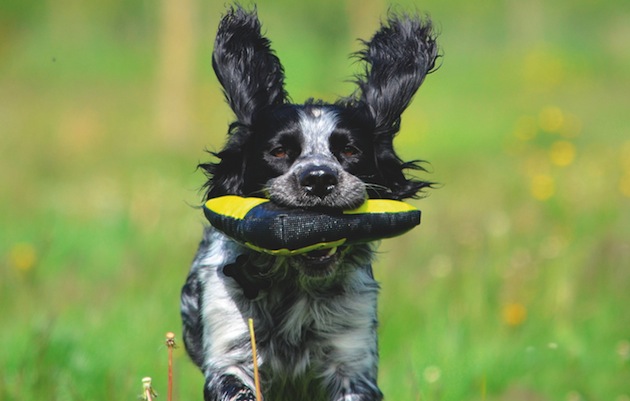 The lightest of hands are needed to get the best results out of these dogs. Kick, stick and shout merchants will not get anything useful from them, because while nothing stops a lurcher hunting, getting them to come back at all, never mind retrieving their quarry, requires a handler they think is worth it. Otherwise the dog becomes one of those liabilities that freelances, hunting on and on for ever-increasing distances, until it gets into the kind of trouble it can’t run away from. Real lurchermen and women are quiet in their ways, economical in their movements and sparing with their words. Lurchers aren’t big on the kind of “who’s a good dog then” slappity-slap interaction that “task” dogs adore.

Nor are they effusive with their affection. A nudge from the huge nose, a deep sigh as they lean against you, or that wide lurcher grin when something pleasing has been accomplished, is usually as much as you’ll get. We have to be appreciative of these crumbs, “less is more” being the lurcher mantra. If they sometimes treat you to a silly five minutes of waggy-tail dashing around, don’t think it is going to happen again at your suggestion. They can deploy the most withering maiden-auntly stare — “You want me to do what with a WHAT?” — if you try to interest them in a toy or activity that a normal dog would find fascinating.

If your lurcher, despite its size, climbs on to your lap — and no other dog ever had so many elbows — you are honoured beyond price. Quite large lurchers fit into surprisingly small spaces once the legs are folded up, and I often find I am wearing one of mine like a fur stole when I sit in the armchair and she lies along the back of it, draped across my shoulders.

Jekyll and Hyde might be names made for lurchers, the death-dealing single-minded pursuit seemingly at odds with the off-duty hedonist, but you get used to it.