As the dust settles after “sprockergate’, David Tomlinson muses on what the Kennel Club and the trialling and gundog worlds can learn from the scandal.

Though the storm  of “sprockergate” may have passed, it has left behind a lot of stirred and muddy water that will take a long time to clear. For those who missed the sprockergate story, it was the accusation that sprockers — cockers crossed deliberately with springers — were being run in cocker field trials, giving their handlers an unfair advantage.

Though there had long been rumours of sprockers competing in cocker trials, the matter came to public attention when a group of 20 A-panel spaniel judges wrote to the Kennel Club (KC) with their accusation. The story featured in national newspapers, including The Sun and The Times.

Spaniel trialling is a largely male pursuit in which there have always been bitter rivalries. Divisions and arguments over sprockergate, many aired over social media, have upset, even infuriated, lots of people. The inevitable result is that there are those in the spaniel world who won’t run their dogs if a certain judge is officiating or even if a rival handler with whom they have fallen out is competing. It is not a happy situation and it is one that the relatively small world of spaniel trialling will take a long time to get over.

Spaniel DNA is all so similar

Sprockergate has revealed a number  of interesting points, not least of which is the inability of DNA testing to produce court-admissible evidence of a dog’s parentage. For the non-scientists among us, DNA evidence is remarkably clever but it is not magic. A dog’s DNA can reveal its sire and dam so it could, for example, show that the name of the sire on the dog’s pedigree is not really its father. However, spaniel DNA is all so similar that it is not going to register conclusively the fact that its father was really an English springer. Don’t forget that both cockers and springers come from the same stock and a little over a century ago were the same breed.

Furthermore, it is widely known that working cockers received an input of springer blood 50 years ago in a bid to improve their performance. Rumour has it that Keith Erlandson, one of the great names in the spaniel world and a former contributor to Shooting Times, asked the KC for permission to introduce springer blood into his cockers. It was refused but  it is suspected that he did so anyway. If this is true — and I stress that there is no evidence that it is — there are many who think he did the cocker a favour. 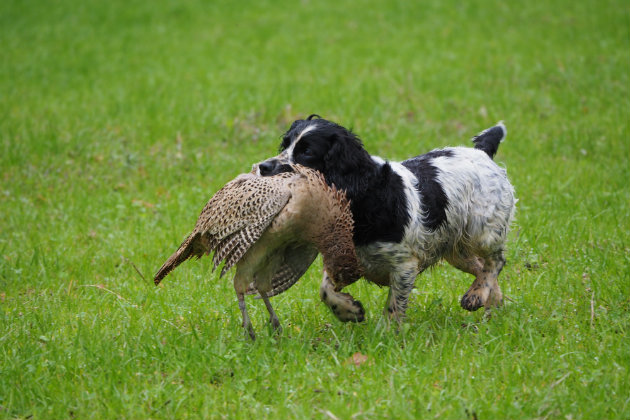 Small cockers may have no problems retrieving pheasants, but hares can cause difficulties

Today, the cocker rivals the English springer as our most popular working spaniel. Exact figures are impossible to produce because KC registrations show that more than twice as many cockers as springers are registered annually. However, most of these registrations  will be of pet or show-bred cockers,  not for dogs of working strain. In contrast, it is generally reckoned that far more working springers are registered annually than show-bred animals.

In recent years solid black or liver have become the most popular colours in working cockers, which is largely due to the use of certain highly successful and prolific stud dogs that throw solid-coloured puppies. There are many in the cocker world who feel that the influence  of these stud dogs has been too great,  so an input of springer blood is no bad thing from a genetic viewpoint. Close breeding makes dogs far more vulnerable to inherited diseases and though generally a healthy breed, cockers do suffer from  a number of hereditary complaints.

Size of the gene pool

It is also worth noting that the cocker’s effective population size (EPS) is 49.10. EPS is a measure of how many individuals are contributing to a breed population, based exclusively on KC-registered dogs. The figure is a measure of size of the gene pool in a breed. Lower than 100 is considered critical by conservation biologists and below 50 puts a breed at grave risk.

Perhaps the most enduring outcome of sprockergate will be the debate as to whether the sprocker should be recognised as a distinct breed.

A poll on the ShootingUK website was divided equally, with those who said “no” generally thought to be people who want the sprocker to remain out of the clutches of the KC. I can’t see how the KC could recognise the sprocker, as it would mark  a complete change in direction, forcing the Club also to consider recognising other distinct cross-breeds such as cockerpoos and Labradoodles.

There are many genuine sprockers that would make great trialling dogs, so it does seem unfair that what is a pure spaniel, albeit of a mix of two types, is barred from competition. However, one A-panel judge commented (with his tongue in his cheek) that there are quite enough sprockers competing in trials already without any more being allowed to run.

Historically, the division between  a cocker and a springer or field spaniel was weight, with only dogs weighing under 25lb allowed to be classified as a cocker. Today, the cocker spaniel breed standard gives a weight “of approximately 28lb to 32lb”. Perhaps spaniel trials should be based on weight, with any variety over 32lb, and any variety under 32lb? That would neatly stop big cockers — or sprockers — outpacing genuine cockers  in competitions. I have a two-year-old sprocker that stops and hunts on command, stays very close and is highly attentive – but… Every Monday starts full of excitement and anticipation. I watch as the curtains are opened, praying for good weather. Sometimes… Gundog training: Someone’s offered me a four-year-old, male, Sprocker – free! It’s been used as a beating dog, and I’m…