Last November, Les Sources de Caudalie was awarded the prestigious Palace status, a title held by the 23 finest five-star hotels in France. Sitting on a terrace sipping the estate’s own wine, watching a horse working the organic vineyards and feeling refreshed after a facial at the spa, which uses the vines in its products, you will appreciate exactly why.

Owner Alice Tourbier calls Les Sources ‘an experience’ and it truly is: a mere 20 minutes from Bordeaux airport, the sense of tranquility here makes it feel a world away. It’s also a family affair—Alice’s parents, Florence and Daniel Cathiard, bought the vineyard here after former lives in business and as members of the French Olympic ski team, their daughter Mathilde started the Caudalie beauty brand and spa and Alice and her husband, Jérôme, entered into the fray with their wondrous hotel and three on-site restaurants. 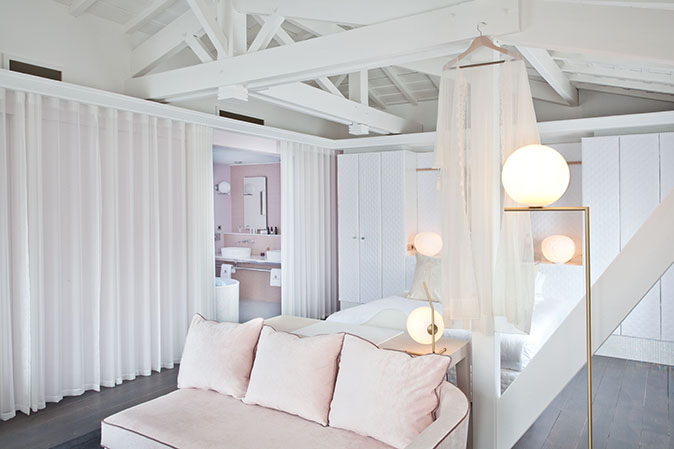 The finest suite in the house is undoubtedly L’Ile aux Oiseaux, a cabin on stilts over a lake, which receives a makeover every two years. The current incarnation, by bridal designer Delphine Manivet, is all soft-pink furnishings, shimmering mother-of-pearl tiles and floating white curtains—it’s like stepping inside a fondant fancy, in the best possible way.