Lundy Island: The joys of a good walk, inspiring beauty and no phone signal

Fiona Reynolds was left refreshed and exhilarated after a trip to Lundy Island.

After an intense university term, nothing is more appealing than the prospect of time on an island with no phone or wifi signals. We’ve spent Easter on Lundy for the past 15 years and we boarded the trusty HMS Oldenburg at Ilfracombe with the sense of enjoyment that accompanies familiarity and freedom.

Lundy, which can be seen from the north Devon coast, is three miles long and half a mile wide: a granite tabletop surrounded by precipitous 200ft cliffs and battered by huge Bristol Channel seas. Only in the southeast of the island is there a proper beach and landing bay and, as we walked from it up to the village in warm sunshine, we could feel our worries evaporating.

‘What do you do on Lundy?’ people ask, knowing that I love walking, but curious as to how such a small island could satisfy me. The list is endless. We go to see puffins – recolonising the now rat-free island in numbers and just arriving after a winter at sea – peregrine falcons and massing razorbills; the herds of wild goat, Soay sheep, sika deer and Lundy ponies; and seals that loll fatly on sun-kissed rocks before sliding into the sea with unexpected grace. Even after 15 years, there are new places to explore among the craggy cliffs. There are newborn lambs and Highland cattle, jigsaws and good books in the comfortable Landmark Trust cottages.

My favourite thing is to circumnavigate the island, taking the path closest to the cliffs. Walking clockwise, I begin at the Old Light, a defunct, beautiful granite lighthouse, working my way north past the Battery, an old lookout; the Earthquake and Jenny’s Cove where puffins nest; the impressive Devil’s Slide, a challenge for any climber; and eventually picking my way along the very top of the cliffs to where North Light perches and the rough seas smash into the rocks as the currents meet. 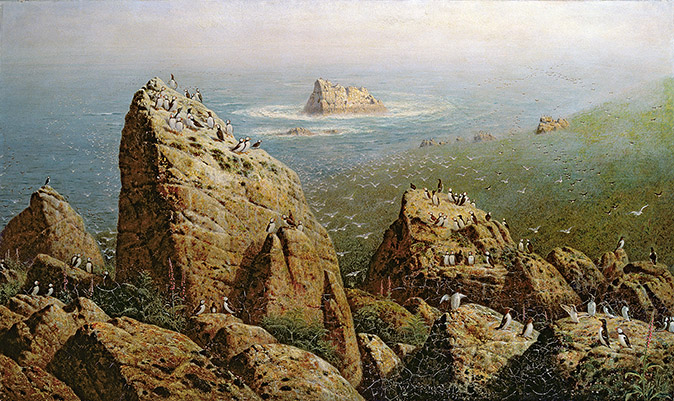 Off the north-east point, I begin to see seals, lots of them, in the water and gathering on the rocks of Gannets’ Bay as I turn out of the wind into the gentler east coast. The path twists and turns through Gannets’ Combe before becoming a delightful, grass-clad walk which hugs the gentle slopes as they slide into the sea. On past the Mousehole and Trap, Brazen Ward – a huge flat rock loved by seals – and under the pinnacle-like cliffs of Tibbetts Hill, haunted by peregrines.

Approaching the village, I walk past the quarries from which a former owner hoped he’d make his fortune exporting granite, along cliff edges happily stripped of rhododendrons and revelling in primroses and early bluebells and into Lundy’s only patch of woodland, sheltered from wind and fenced against deer.

I descend to the landing beach and Rat Island, Lundy’s big toe, before climbing steeply to the Castle, the oldest building on the island, with its history of smuggling, pirates and dungeons. Skirting the seaward side of the Castle exposes the delicious sweep of the south coast, its springy turf dotted with sea thrift teased into bloom by the April sun.

The cliff edge is scarily steep: once, the farmer’s quadbike was picked up by the wind and smashed to smithereens on the rocks below. As if to emphasise a sense of peril, the island’s south-west corner is dominated by a vast chasm, the Devil’s Limekiln, the product of a massive ancient geological slip.

My last leg is back up the west coast, head down against the wind, past Montagu’s Steps and Pilot’s Quay. The approach to the Old Light is welcome – this walk hasn’t been a stroll. My reward is a half-pint of Old Light bitter at the Marisco Tavern, which confirms that all’s well in the world after a good walk, inspiring beauty and no phone.

Fiona Reynolds (@fionacreynolds) is Master of Emmanuel College, Cambridge and author of ‘The Fight for Beauty’