2017 marks 250 years since the first foundation stone was laid.

The first foundation stone for the Royal Crescent in Bath was laid on 19th May 1767. It would take a further eight years for the construction to be completed according to the design of John Wood the Younger.

One of Britain’s greatest architectural landmarks, this semi-ellipse of thirty Grade I listed houses arranged around a great lawn remains one of the most impressive representations of architectural innovation – and was one of the reasons why Bath was awarded its UNESCO World Heritage status in 1987. 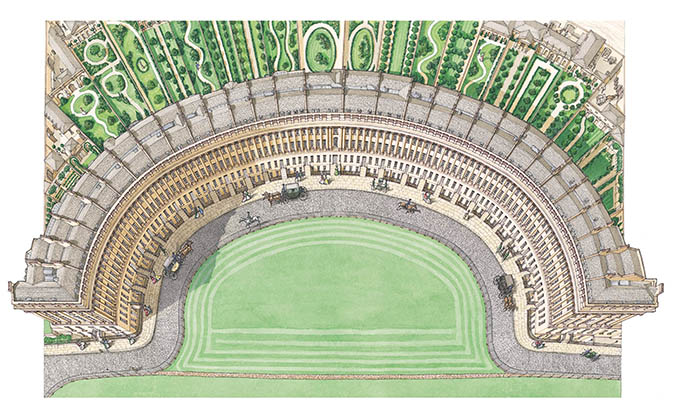 Image of the Royal Crescent, Bath, © Stephen Conlin. For a folding souvenir card of this artwork, with details of notable persons who lived in the Crescent, and a cut-away drawing of a typical house, please go to www.theroyalcrescent.com

“The Royal Crescent is one of the supreme expressions of the idea—widely explored in the development of British cities during the 18th century—that numerous houses can be integrated to monumental effect,” explains Country Life‘s Architectural Editor, John Goodall.

“Its curving frontage, comprising thirty houses and with the ends set 540 feet apart, is of palatial proportions and punctuated by 114 columns. The design of the elevation is of a Roman theatre turned inside out. 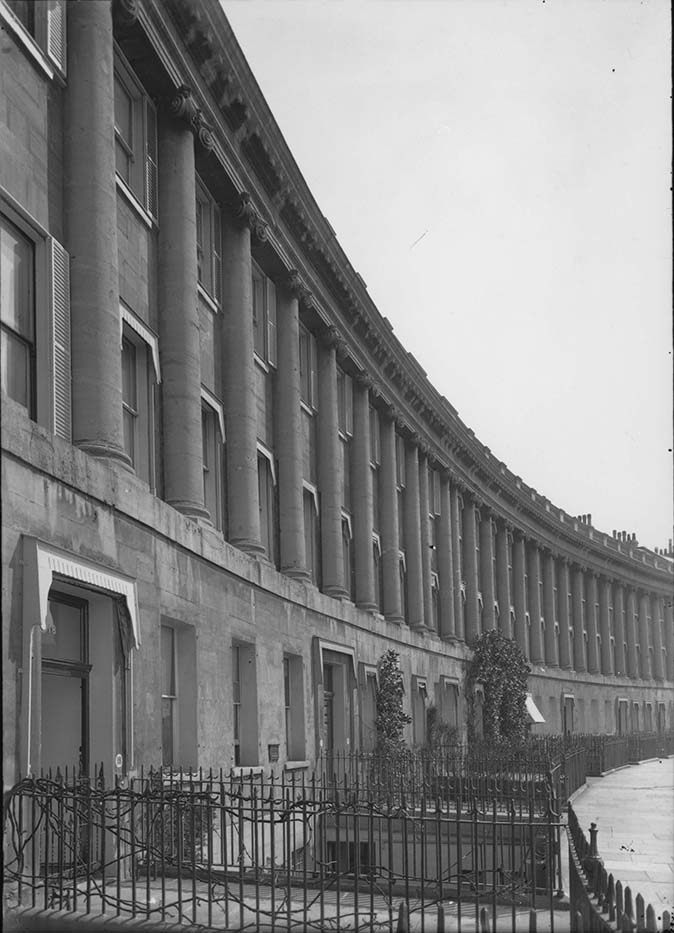 “No less significant is the outward-looking character of the design, formerly overlooking a rural prospect; this was in effect a terrace of country houses.

“It’s important to acknowledge that the Royal Crescent was also heir to the architectural ideas of Wood the Elder, whose ideas — absurd and fantastical as they may seem today — about the Druidical past did so much to shape the splendours of modern Bath.”

The design concept reflects an idealised view of architecture which was believed to have been lost. The Royal Crescent is therefore in part an attempt to recapture the simplicity and purity of architecture of both the Romans and the Druids – with Stonehenge at the time often believed to have been a Roman construction, thanks to a misinterpretation by the 17th century writer Inigo Jones. 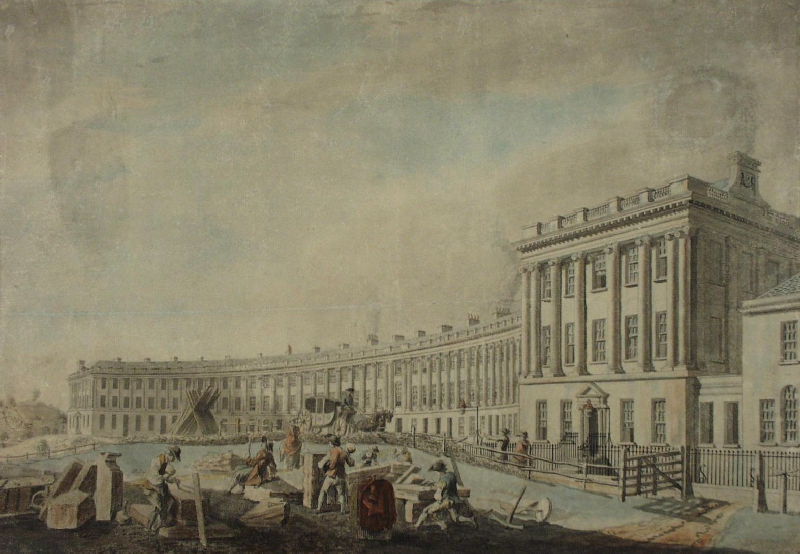 The completion of the Royal Crescent, Bath by Thomas Malton 1769

Celebrating 250 years of the Royal Crescent

To celebrate the Royal Crescent’s 250th anniversary, over 70 events will be taking place in Bath throughout 2017.

Leading the celebrations is beautiful 5* Royal Crescent Hotel & Spa, who boast a collection of specially curated RC250 packages and experiences including the RC250 tasting menu designed by head chef David Campbell which charts 250 years of local food in a six-course menu paired with Tattinger champagne, soothing spa treatments, thrilling hot air balloon rides over the city and even a specialist run of of RC250 bath gin.

Don’t miss the special Foundation Stone Day Grand Parade on Sunday 21st May 2017, and the “Lives of the Georgians” public event on the lawns in front of the Royal Crescent on Saturday 29th July 2017.

The Royal Crescent in Bath, England. Photo by David Iliff.

The Royal Crescent on film

The Bath Film Office promotes and assists film-making in Bath and the north-east. Here are five productions that used the Royal Crescent as a location

Susan Hampshire received an Emmy Award in 1973 for her portrayal of Becky Sharp in this BBC adaptation of William Thackeray’s novel.

Produced, written and directed by Stanley Kubrick, this film is based on the 1844 novel The Luck of Barry Lyndon by William Thackeray.

Set in the late eighteenth century, The Duchess is based on the life of Georgiana Cavendish (played by Keira Knightley), Duchess of Devonshire.