The ‘dreamy and absorbing’ garden at Constance Spry’s holiday bolthole

Ard Daraich was the holiday home of Constance Spry, the grande dame of floristry – but it wasn’t her who transformed these exceptional woodland gardens, as Non Morris found out. Photographs by Val Corbett.

There is a lot to think about by the time you get to sit on the rough-hewn, throne-like bench in the upper part of the hillside garden at Ard Daraich in Inverness-shire. This is a serenely beautiful spot, sheltered by elegant and protective stands of Monterey cypress. There is a soft, light-catching carpet of gold-green moss at your feet and a perfectly framed view across Loch Linnhe to the stormily lit hills of Glencoe. However, the story of the making of this garden is an intricate one and worth taking time to absorb.

To reach the bench, you walk up through a series of winding paths that weave their way at first through lush herbaceous planting. There are cream-edged hostas, small huddles of Welsh poppies and swathes of deep-pink Primula pulverulenta, the planting punctuated by flame-like bursts of bright white Smilacina racemosa. As you climb higher, the vegetation becomes bigger-leaved, taller and more exotic, and the ground at your feet tougher. 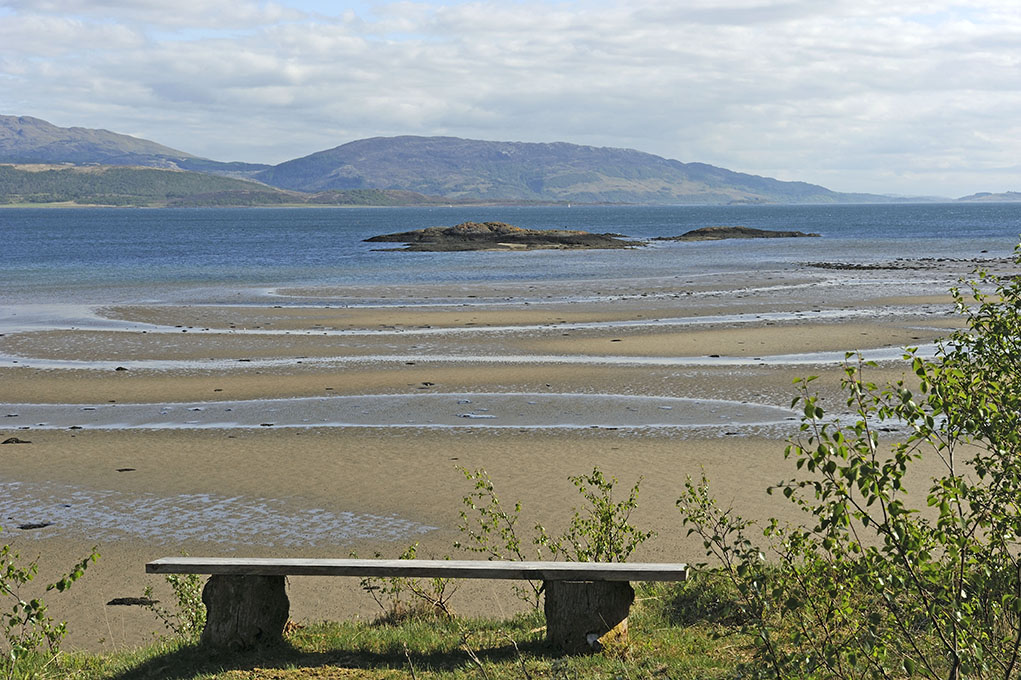 You are sheltered by a lovely canopy of mature rhododendrons, maples and sorbuses, interrupted by outcrops of sheer white granite that illuminate the space. If you look up, you will catch sudden bursts of dramatic sky between the huge felted leaves of the rhododendrons or the almost artificially geometric criss-cross patterns made by the branches of Abies squamata.

If you look down, you will see the pretty salmon-pink house – a former croft – nestling below an artlessly layered tapestry of ferns, jewel-coloured rhododendrons and elegant acers. This is the delicate, exciting, atmospheric garden of Norrie and Anna Maclaren.

“Ard Daraich is a dreamy and absorbing garden”

You may perhaps have wanted to visit Ard Daraich because it was once the holiday home of ‘floral decorator’ and cookery writer Constance Spry. Her most famous commission was to mastermind both banquet and flowers for the Coronation of Elizabeth II (bequeathing us the British party staple of coronation chicken).

In fact, all that Norrie can tell me about her time here is that the house was painted a ‘strawberry pink’ and that the garden was limited to a traditional herbaceous border and formally trained apple trees. 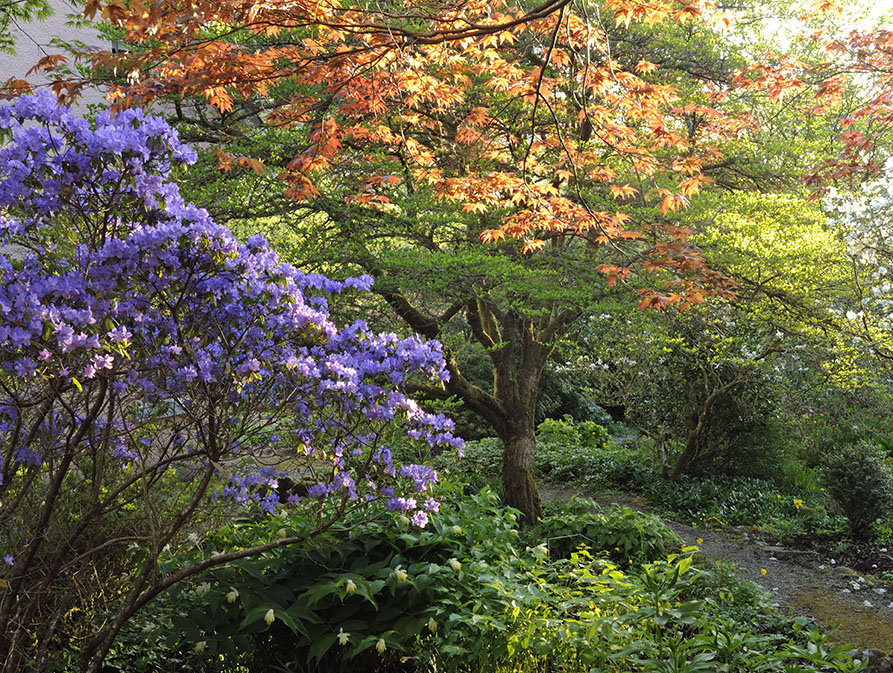 Her one lasting gesture was to create a pair of skinny meandering streams – their role being to divert the worst rainfall away from the house – which she called the Blue Nile and the White Nile. The names lead, of course, to many a theatrical invitation to show the visitor the ‘Source of the White Nile’, but Norrie loves having water in the garden – ‘it makes it all work’ – and he wouldn’t be without it.

Spry was famous for using unexpected hedgerow flowers or even fruit in her arrangements for the grandest Society events. The most telling story of her time at Ard Daraich came from a neighbour’s mother who remembered visiting the bright-pink house and being amazed at a vase filled only with wild raspberries.

Norrie’s parents bought the house in 1969 – the story goes that they heard the house was for sale at a drinks party at Achnacarry Castle. They had been living near Newton-more in the Grampians, but were passionate gardeners and desperate for a more hospitable climate in which to start a nursery. 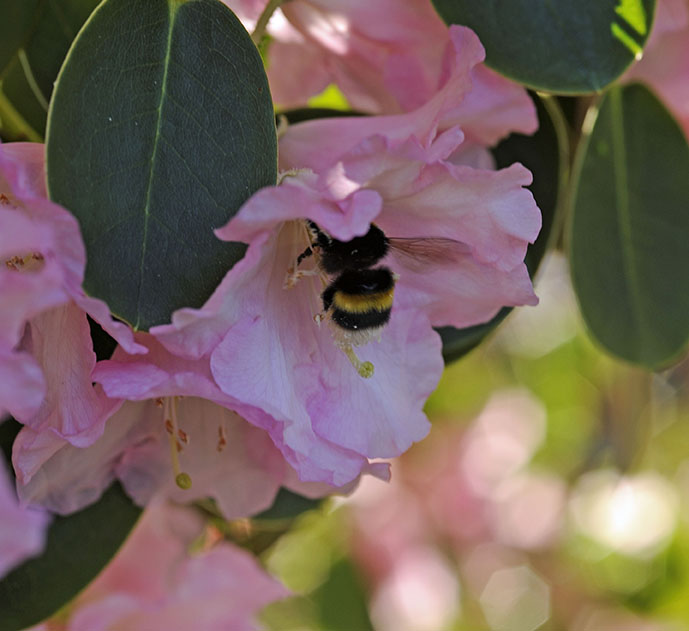 Through knowledgeable plantsmen friends (Ilay Cambell of the dramatic woodland gardens at Crarae and Jack Drake, who established the alpine garden at Inshriach, Aviemore), they met the extraordinary Carl Ferris Miller, an American-born South Korean banker best known as the founder of the Chollipo Arboretum in South Korea.

Many of the beautiful, mature and often rare trees and shrubs at Ard Daraich were grown by Norrie’s father, David Maclaren, from seed sent as a gift from Chollipo.

Specimens include a particularly fine Stewartia pseudocamellia and a magnificent snowbell tree (Styrax japonica), both planted in perfect positions close to the house, as well as a collection of nearly 700 rhododendron and swathes of Lilium nepalense that ‘come back religiously every year’. 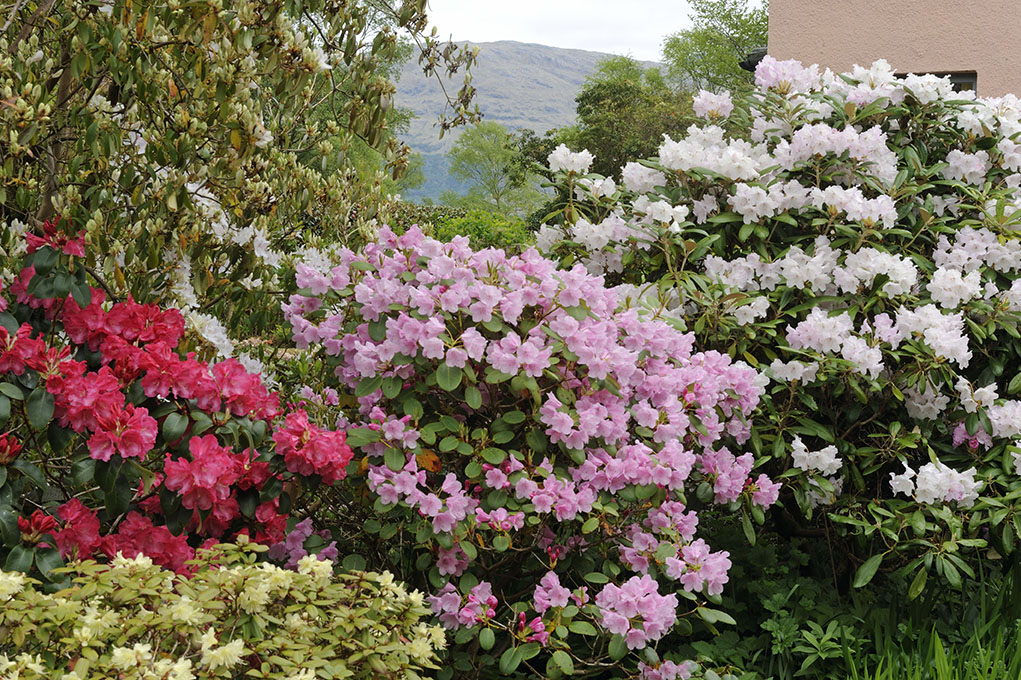 Film writer and producer Norrie came to live at Ard Daraich in 1999 just before the death of his father. Rather wonderfully, there is still an annual invitation from Chollipo to select 20 packets of seed. Some of the plants that emerge are still not named – ‘even the Edinburgh Botanics don’t know what they are,’ he says – but the collection is slowly being catalogued with the help of the Royal Botanic Garden Edinburgh and the Rhodo-dendron Species Conservation Group.

Norrie and Anna have personal favourites of course: Sir Charles Lemon, with its distinctive cinnamon indumentum on the underside of its leaves; Rhododendron keysii, with its extraordinary tubular flowers in fiery shades of red; and the ‘delightfully camp’ Pink Gin, which reminds them of its previous owner.

The journey, however, between inhospit-able rocky hillside and the atmospheric, treasure-filled garden of today could not have been more challenging. At the front of the house is an area of alluvial plain, ‘which means there was actually a depth of soil to grow things in’. Here, David replaced Spry’s beech hedge with a glossy camellia one, a mixture of Camellia x williamsii Carolyn Williams and the double-flowered Debbie that flower so vigorously ‘you almost get tired of pink’. 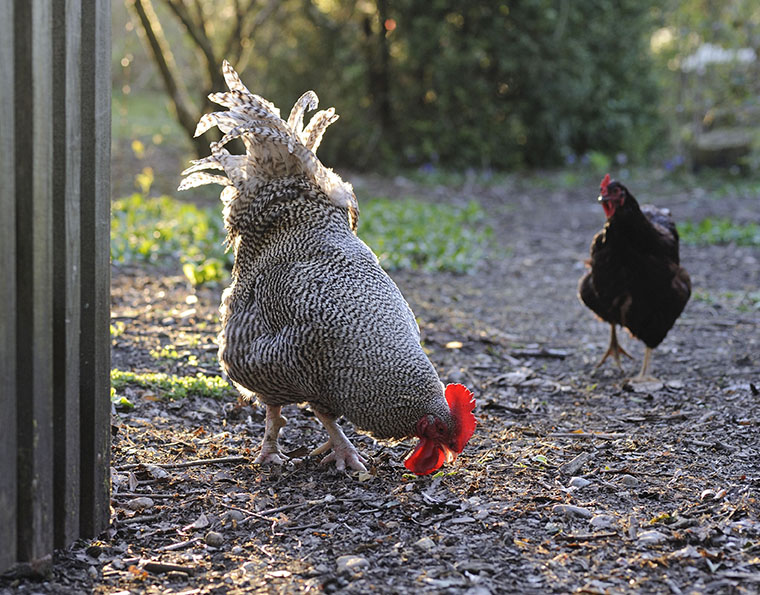 In front of this is a great row of contented hydrangeas over the top of which Loch Linnhe and Glencoe are again laid out before you. Against the house is Rosa Constance Spry, which was the very first of the repeat-flowering English Roses to be developed by David Austin. Its strongly myrrh-scented flowers are, when fully open, just a shade lighter than the grey-pink of Ard Daraich house and, when in bud, a shade darker than the house.

Once you venture up the hill behind the house, there is a little peat but, mostly, it’s solid granite underfoot, covered with moss. Over the years, an ingenious technique has been perfected. ‘We clear the rocks of moss with a knife and a wire brush and we use the moss to create a soil. We roll it up, let it rot and then plant trees – tiny ones – straight into sphagnum moss.’

As well as the rhododendrons, there are some exquisite trees. There are nearly 100 acers, numerous sorbuses, liquidambar, red oak and Nyssa sylvatica to intensify the fiery autumn colour, and a stand of the elegant, glossy-leaved Nothofagus antarctica that’s Norrie’s ‘favourite tree and the toughest tree you’re ever likely to see’. 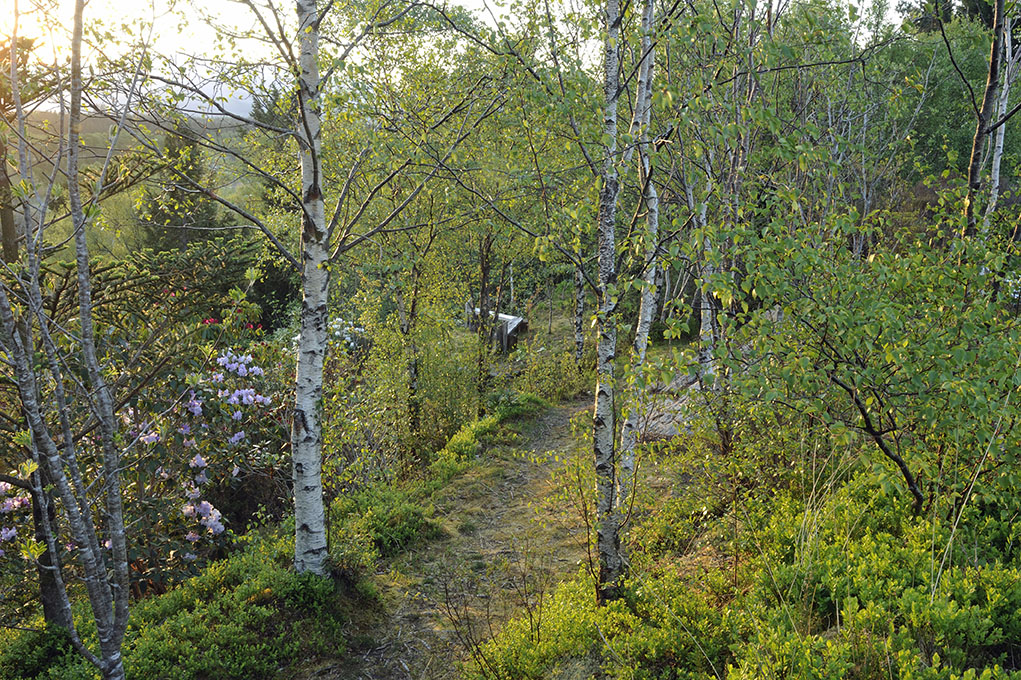 Finally, Anna’s mother, Faith Raven, was able to declare that Ard Daraich ‘certainly had turned into a house in the forest’. Anna had grown up spending her school holidays on the rambling family estate of Ardtornish only 30 miles away, so joining Norrie here in 2002 felt like coming home. Anna is a landscape artist whose work is an exploration of the relationship between the exterior environment and internal feeling.

She’s a passionate gardener from another eminent gardening family – her father was the classicist and amateur botanist John Raven and one of her sisters is gardener and writer Sarah Raven – but what she loves most about the garden at Ard Daraich is the moss. She remembers falling in love with ‘the indefinable green of moss’ when she was a little girl and dreaming of ‘being small enough to find shelter in all that olive-green velvet’.She’s known to head up the hillside ‘with a hand brush, sweeping old leaves and dead grass away from my tapestry of green where the need for other plants often feels superfluous’. 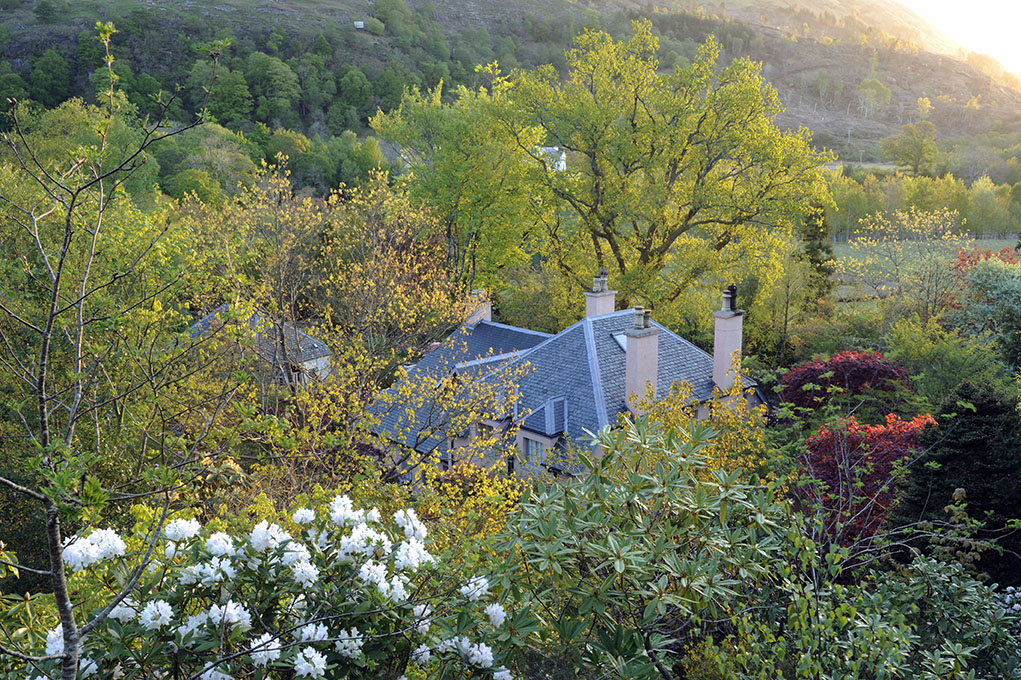 Ard Daraich is a dreamy and absorbing garden. Its rugged paths wind up through exquisite planting: one minute, you’re admiring the fine cutout shape of a sorbus leaf against the sky and the next, you’re examining the felty salmon-coloured new foliage of a species rhododendron.

Anna and Norrie garden it together in the gentlest of ways – raising the canopy of a tree perhaps or considering the balance of colour – but never trying to dominate. Ard Daraich is a serious plant collection, but it’s also a wonderful and atmospheric garden that’s completely at ease in its wild lochside setting. 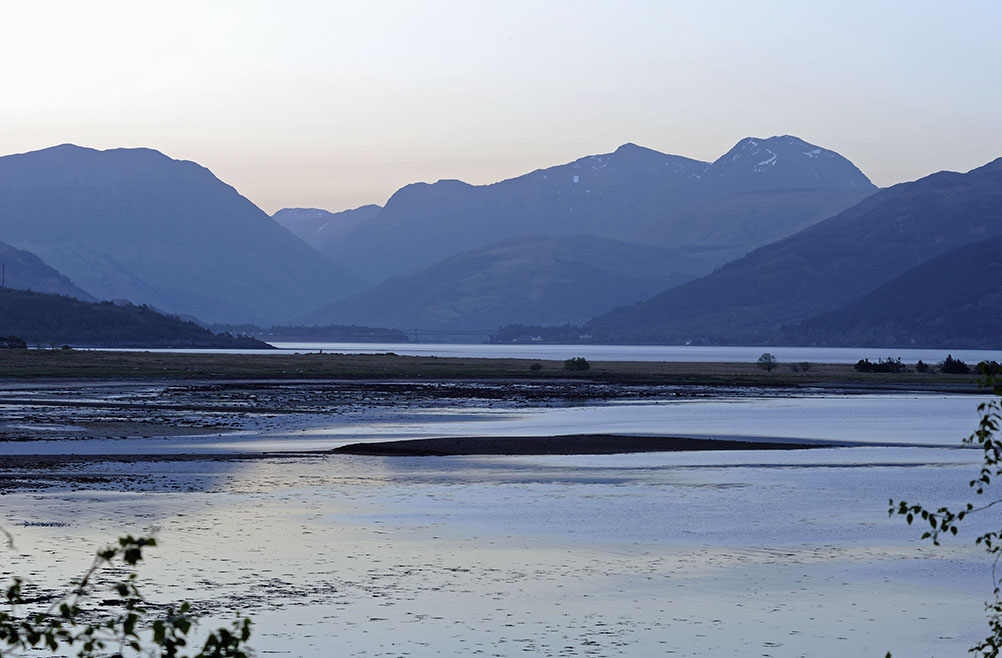