Drama at the Rural Oscars

Local businesses were recognised at the 2017 Countryside Alliance Awards, but the celebrations were overshadowed by the tragic events at the Houses of Parliament

Rural businesses from across England and Wales were celebrated at the 12th annual Countryside Alliance Awards at the House of Lords two weeks ago — a happy event that took a sombre turn as the Westminster venue was sealed following a terror incident.

As the ceremony drew to  a close, Khalid Masood’s attack on the far side of the Parliamentary estate led to a lockdown of the building. Winners, nominees, Countryside Alliance staff and Shooting Times news editor Mark Layton were among those held inside for an additional five hours for their safety. Despite the tragic events that unfolded outside and the subsequent long wait, the ceremony was a positive one and those who had to remain inside did so calmly and patiently. 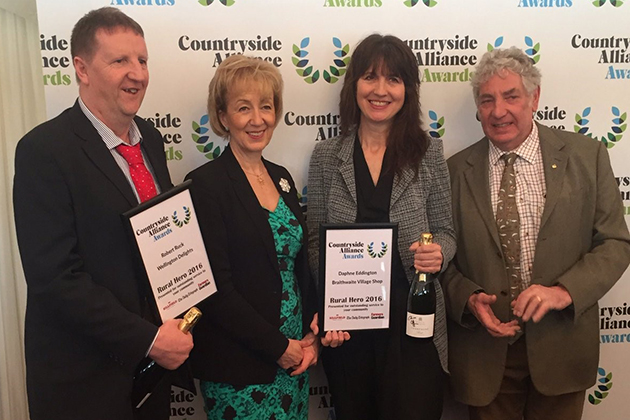 There were five competitive categories in total at the awards, which are nicknamed the Rural Oscars, each with an outright winner and a “highly commended” runner-up and three special prizes given out.

• Champion of the local food/drink category was Lawns Farm Shop and Morthen Milk near Rotherham in South Yorkshire, while Foxholes Farm Shop, Butchery and Tea Room in Hertford was highly commended.

• Ponsanooth Village Stores in Cornwall was the champion of the village shop/post office category, with Napton Village Shop in Warwickshire in second place.  • Bluebell Dairy in Derby took the tourism enterprise title, followed by the annual Beverley Food Festival in East Yorkshire.

• Hayley Hanson Hide was crowned champion in the  farm enterprise category, while Brinkworth Dairy at Chippenham in Wiltshire took the highly commended spot.

• Winner of the butcher category was Pete the Meat of Redditch, Worcestershire, with Lavenham Butchers in Suffolk in second.

• Two village shop owners were also named “rural heroes”. Daphne Eddington of Braithwaite in Cumbria, has been flooded five times but keeps re-opening for the sake of her community. She has also created a Braithwaite brand to help market the produce and the area. Rob Ruck of Wellington, Herefordshire, was recognised for going above and beyond the call of duty for his tight-knit community, running the post office and shop, acting as a hub for deliveries (and gossip) and ensuring young and old alike are included in village life.

• Finally, the Clarissa Dickson Wright legacy award was presented to Briddlesford Lodge Farm on the Isle of Wight for its work to keep  its Guernsey herd going and its efforts to promote food and farming, to educate the next generation and to ensure farming’s future.

“Beating heart of our countryside”

Speaking at the event, environment secretary Andrea Leadsom said:  “Rural businesses are not  just the beating heart  of our countryside — they are also a vital part of the UK’s economy, generating almost £230billion every year. I’m really pleased the Countryside Alliance is honouring some of these hard-working businesses and ensuring they get the recognition they deserve.
“Today’s winners and nominees represent the very best of rural Britain and I’m delighted to celebrate the crucial role our post offices, farm shops and food start-ups play in connecting communities across the country,” she added. The Oxfordshire Shooting School, at Enstone, has won the enterprise category in the South East finals of the Countryside Alliance…