Firearms security is crucial. Last year’s tragic death of MP Jo Cox is a reminder of what can happen if your guns fall into the wrong hands

One of the most tragic events of 2016 was the murder of the MP, Jo Cox. She was shot with a sawn-off .22 rifle. Quite how the odious Thomas Mair came to be in possession of it is not known, but it is known that it was previously a lawfully held rifle that had been stolen. It is a timely reminder of what can happen if guns fall into the wrong hands – 635 guns were reported stolen or lost in 2015.

Surprisingly the Firearms Act has nothing to say about the need for security. Evidently it was not thought something Parliament needed to debate and security requirements for rifles have, at least since 1937, been included in the standard conditions on an FAC. A security condition for shotguns was introduced in 1988. It is an offence not to comply with conditions in a certificate, but if you fail to do so you are more likely to have your certificate revoked than be taken to court. A limited security requirement for air guns was introduced in 2011.

Let’s look at rifles and shotguns first. The relevant condition requires that they must be stored securely to prevent, so far as is reasonably practicable, access to the guns by an unauthorised person. For the majority of readers this condition is best met by installing a metal gun cabinet and bolting it to the fabric of the house. If your house has a steel frame or is built of wood or is a mobile home then you will need a slightly different approach. In all cases the key wording is “reasonably practicable”, although this phrase has no clear legal definition. Your ordinary household security should include decent locks on doors and windows. Don’t forget to lock the front door if you are in the garden. 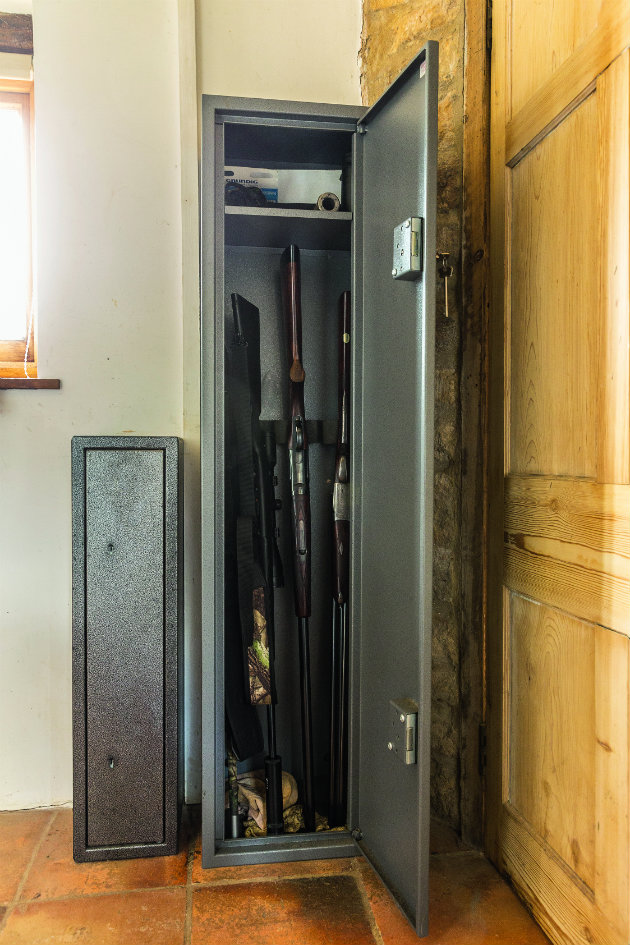 The gun cabinet should be out of sight of casual visitors – so the hall, kitchen and reception rooms are not normally suitable places. The utility room can be good, provided the washing machine or dryer do not vent moist air into it. There’s usually a flat surface on which the gun can be cleaned before being popped in the cabinet.

Attics, whilst difficult for a burglar to access, are not suitable as they have the largest temperature and humidity range of any part of the house, which is bad for your guns. I met a beater the other day who told me his cabinet is in the attic, but he kept his guns in the wardrobe because it was too much hassle to get into the roof. Need I say more? Accessibility is important because you’re more likely to leave your gun lying around if putting it away is tedious.

Away with your gun

Different considerations apply when the gun is in use. If you leave it in the car, make sure it is out of sight and the car locked. Pub car parks are a popular venue for thieves. Always remove a key component such as the bolt or forend. If you have window stickers proclaiming your membership of a shooting organisation they also proclaim the possible presence of guns. Recently, on Merseyside, some shooters were ambushed on the way home from the range and had their guns stolen.

A few hotels offer secure gun storage, but you can only use it for a rifle if the hotelier is an RFD. Shotguns can be stored provided the person accepting the gun has an SGC. In all cases you need to see the certificate and get a receipt. If there’s no secure storage you’ll have to keep a key component on your person at all times. There’s little excuse for having a gun stolen intact.

With airguns in England and Wales you need to ensure that they are not accessible to anyone under the age of 18. With toddlers around, it will be suffice to keep the gun out of reach, perhaps on top of a wardrobe. With older children the gun will need to be kept under lock and key, but an ordinary cupboard will suffice. Perversely, although a 15 to 17 year old with an SGC can have unrestricted access to a shotgun, they can’t have unrestricted access to an air gun. If you share your gun cabinet with a 15 to 17 year old you can’t keep your air gun in it.

In Scotland you will need an Air Weapon Certificate to be in lawful possession of an air gun. The application form requires you to give details of the proposed security arrangements and the Act requires you to take reasonable precautions for the safe custody of an air weapon, which means preventing non certificate holders from having access. You are required to allow the police to inspect the place where you intend to store the gun – a locked drawer or cupboard will do.

If a rifle or shotgun (and, only in Scotland, an air gun) is lost or stolen the police must be informed as soon as practicable. Explaining away careless security can be difficult!

“Happily, the criminal use of firearms stolen from lawful holders is very small”

In October 2014 the police launched a campaign of unannounced security inspections, which were primarily intended to catch people out – although it was sold to the shooting organisations on the need to prevent jihadis accessing privately held guns. Nominally the visits were meant to be based on specific intelligence, but in more than 90 per cent of inspections no matters of concern were found, which is an appalling intelligence failure. The provision for such inspections is still in the Home Office Guidance, but if you are descended upon by a (probably untrained) inspection team you should politely ask them to make an appointment and return later.

Happily, the criminal use of firearms stolen from lawful holders is very small. Most weapons in criminal hands come from illegal sources with the seizure rate of illegal weapons in the EU running at more than 100 per month. That’s no cause for complacency so please take good care of your guns. A: On Sunday August 10 1997 a police officer called at the house of Mr Mark Farrer. He wanted to inspect his firearms security. Mr… 1.  Do you need to heat your gun cabinets in winter? If the temperature is plummeting outside will your guns… New guidance to prevent under-18s accessing airguns could mean a £1,000 fine if you fail to secure your air rifle…