10 of the most challenging drives in the British Isles

This shoot is one for the connoisseurs and Kim Beddall has any number of fine drives across three beats. Shooting Gazette correspondent John Walker said: “While Abyssinia may be the most famous, it is the Beeches drive on the Sutton Veny beat that will test the best and a cartridge to kill ratio of anything less than 4.5:1 is very good shooting indeed. Guns peg along a wide grassy valley looking towards a high bank, from the top of which partridges stream over the line at varying heights. Wind helps but is not essential to provide stellar low-ground shooting.” 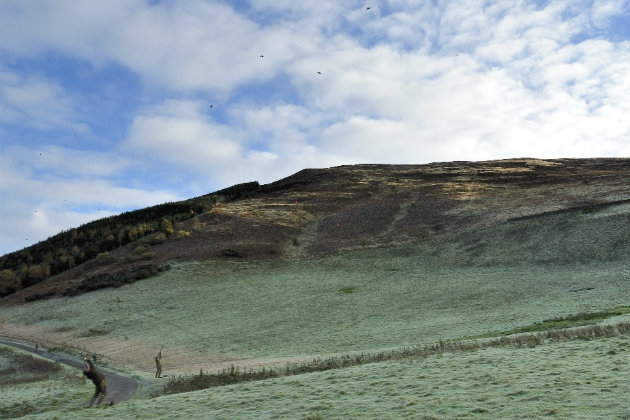 Bowhill in the Borders can challenge the very best guns, and Black Andrew is the toughest drive of the lot

This ominously named section of the well-respected Bowhill shoot near Selkirk is renowned as one of the best drives in Scotland. The River Yarrow cuts through the shoot and the topography makes for some extreme high bird shooting. Guns stand in front of a foreboding steep bank of spruce and gorse, which helps to build the tension before a high bird spectacular. It’s obvious this ground is ideally suited for high pheasant shooting, and the steep-sided valleys, which are a hallmark of the Scottish Borders, make for a stunning setting to pit your skills against some phenomenal sporting birds.

Wales shares top spot in the pantheon of high pheasant shoots and Robert Jones’s Llechweddygarth, near the quaint rural village of Langynog, has a place amongst the best. The rugged, untamed mountains and breathtaking waterfalls provide a beautiful backdrop for some memorable shooting, while country lanes and tracks take you to locations way beyond satnav.

Correspondent John Walker said: “Lurking on the shoulder of Snowdonia, its topography is only occupied by climbers and sheep and Grias Mountain is the signature drive. Guns peg 130 metres below the summit and watch birds launching off the top to come barrelling down and flaring up and over the line. Ratios of 20:1 are not unusual.”

Farmer David Hitchings had the vision to turn his land to driven shooting way back in the 1960s, and ever since then these chalk valleys have been providing guns with some superb shooting. These days it’s David’s nephew Rob who runs the shoot but, if you’re lucky, David might make an appearance on shoot day. Perrett’s Valley sees guns lined out in an L-shape along the eponymous flat-bottomed valley, with woodland on the hill behind and open scrubland to the fore.

As the beaters start their pincer movement to the front, birds begin to race across the line, either diagonally or straight across. Because they are heading for the high trees behind they maintain their height and, given a decent breeze, they will be motoring too. And to add a little extra to the challenge, some of the birds take on the whole line, thereby sometimes giving the gun on the end the opportunity to wipe a lot of eyes…

We thought we should mention Holkham, the north Norfolk estate which is considered by many to be the birth place of driven shooting, as we know it today, and in particular Scarborough Clump. As Brian P. Martin says in his book, The Great Shoot, at the turn of the 19th/20th this drive: “Had a reputation awesome enough to scare the faint-hearted away.” In fact in those days the whole morning’s shooting was devoted to effectively blanking in the birds towards Scarborough Clump.

Then, after lunch, initially just one keeper would flush the birds from the wood, with the guns lined out three deep beyond. Once the initial flushes had taken place the beaters would move in and flush the whole wood. This was driven shooting on an epic scale and, with everything geared to this spectacular finale, there must have been huge pressure on the keeper and his team.

Shooting Gazette instructor Adam Calvert said: “Just driving into the area which hosts this drive starts to fill visiting guns with dread and excitement in equal proportions, as the surrounding hills get higher and higher.

Once in position and with a trembling hand on the gun stock the birds, partridges in particular, start to appear like grouse over the top of the hill in the near distance. They hug the contours of the hill initially and then break to cross the guns stood some 200 feet below, presenting high curling birds which have no straight line, therefore posing a very difficult yet challenging shot. Nobody is pretending they are easy but if you are after a serious challenge then this corner of Northumberland is for you.”

This representative from the south east of England offers some truly thrilling shooting. Correspondent John Walker said: “The guns peg out along the valley floor some 60 metres below the crest of the hill in front, which gives the birds a rather obvious head start. The grassy slope ahead of the guns rises deceptively steeply and a hedge line on its crest forms a natural flushing point. The top of the bank is planted to cover crop.

Some beaters push birds from the left along the bank to find the temporary sanctuary of the cover crop, while others begin their walk on the right of the line, bringing in the outlying scrub and crop. The birds are then dribbled out in small flushes to give the guns some sighting practice, before the bigger flushes of high, fast pheasants begin to come off the top of the bank. By the time the two beating parties have met on the left flank, every peg will have seen its share of birds pass high overhead or as high, fast crossers.”

This shoot is one of the first which trips off the tongue when discussing high bird shoots, and the flagship of the Bettws Hall empire truly does offer the sort of birds that can give you nightmares and some occasional moments of sheer delight. The shoot lies in the valleys of the Cambrian Mountains and at the foot of Snowdonia national park and the 12,000-acre estate provides endless drives to appeal to all manner of guns and ability.

Famous drives such as 720, Little Gwillems and Humble Pie have stood the test of time but Tommy’s was added a few seasons ago and has already established a formidable reputation.

Should you be pegged in the middle of the line, where the highest birds soar from their mountainous flushing point over the lowest pegs on the drive, then you will need every ounce of confidence you can muster to even pull the trigger, never mind believe you will be successful very often. If you are lucky they’ll take you to a mere high bird drive afterwards to try and rebuild your confidence. 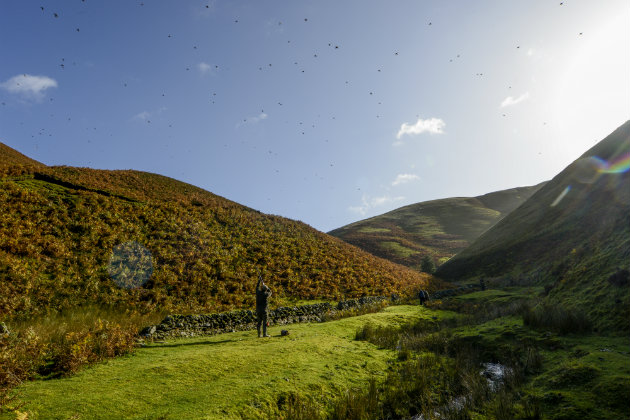 Over the last few seasons the partridge shooting here has developed a deserving reputation as one of the highest and most difficult in the UK, with birds flying from a great range of challenging heights and angles. In truth, they don’t do any easy birds here, and there are a number of drives which will test the very best guns, but the Whirlpool drive didn’t get its moniker for no reason…

Here guns line out into a deep and narrow ravine, which is closed at one end by a steep bank and hemmed in by equally steep banks on either side. It looks and feels like a partridge ambush and that’s exactly what transpires. It’s driven from two directions, meaning the guns have to have eyes in the back of their heads for the early part of the drive. And swirling winds mean that even when you do pick your bird, it will inevitably be curling and either racing on a tailwind or moving deceptively slowly into a headwind.

The Ashcombe estate belongs to Guy Ritchie and there is certainly a star quality about the shooting on these 1,100 acres of chalk downland to the west of Salisbury. A series of narrow valleys create perfect partridge shooting terrain and Win Green offers you the chance to seriously lighten your cartridge bag without adding too many birds to the game cart. Win Green Hill is 911 feet above sea level so you don’t need to be Einstein to work out that any birds flushed from it will require a certain flexibility in the neck department. David Beckham was a high profile visitor to the shoot last season, so it’s certainly on the A-list. 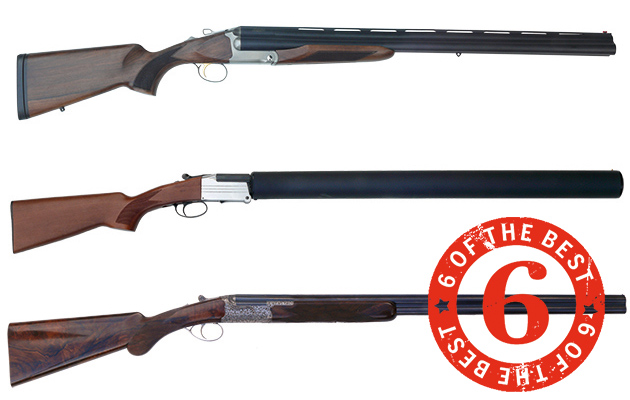 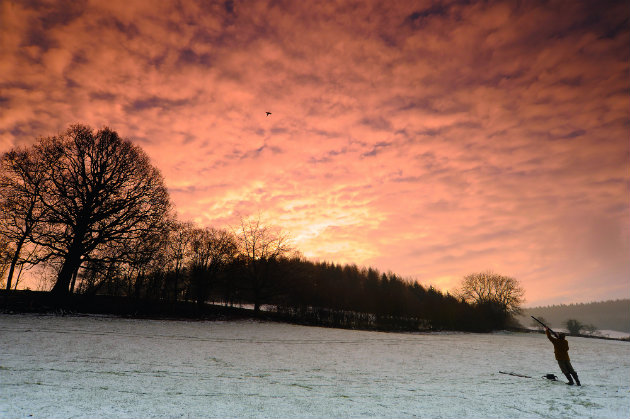 TREGOYD, POWYS This stunning shoot just to the south of Hay-on-Wye is run by the ambitious team of Ben Brown and headkeeper…