10 beautiful destinations for golfers and non-golfers

Now the season is over, perhaps it’s time for a round of golf somewhere magnificent? Rob Smith lists the game’s finest courses …

10 Beautiful Destinations For Golfers And Non-Golfers

The world is your Oyster!

Golf is blessed with magnificent courses and stunning scenery all over the world. Rob Smith suggests a bucket-list tour of some of the game’s finest…

With around 34,000 golf clubs worldwide, the game offers an inexhaustible supply of new and varied courses to suit all tastes and pockets.

Most are more than worthy of a game, but some, such as the Old Course at St Andrews, should be on the must-play list of every golfer.

Here, though, we leave home treasures behind and cross over into continental Europe and beyond to take a look at ten fabulous and very different designs guaranteed to challenge and delight.

Yes, some are pricey, but all offer genuine, aspirational, bucket-list golf… 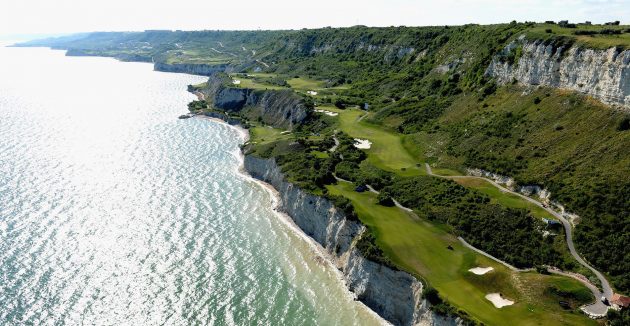 There are some courses whose design and looks are so striking that even the silkiest of words simply cannot do them justice. Thracian Cliffs is one of that rare breed, a Gary Player masterpiece in a unique location with 18 visually sumptuous holes.

This is one of the most photogenic courses in the world, and any one of these 18 holes would be the star attraction just about anywhere else. Player has a track record of bold designs that includes the Links at Fancourt in South Africa, and Saadiyat Beach in Abu Dhabi. But the canvas he had to work with on the Black Sea shoreline of Bulgaria allowed him to create something very special indeed.

Its fame, boosted by the visit of the Volvo World Match Play Championship in 2013 – won by Graeme McDowell – has spread globally even though it opened for play just six years ago. Its relatively remote location, 250 miles east of the nation’s capital Sofia and half that from Bucharest in neighbouring Romania, means that the resort is less crowded than many other golfing greats.

The opening eight holes run along the cliffs lining the shimmering blue sea, and include the signature 6th, the second of back-to-back par 3s. Here, you play from a very elevated tee to a green perched on a promontory bordering the ocean; next stop northern Turkey over 200 miles away!

On a bucket-list course, this is a real bucket-list hole, but the wow-factor remains throughout, with the next hole played from an island tee built out into the water. You turn for home after the 8th, but there is no let-up in excitement, with all of the remaining holes offering panoramic views out over the water. Thracian Cliffs is one of the most breathtaking courses in Europe, with 18 signature holes in the most glorious of settings.

The Dominican Republic is one of the larger territories in the Caribbean, which is blessed with magnificent natural beauty that varies greatly from island to island. Architect Pete Dye is renowned for his dramatic creations, and Teeth of the Dog is one of three Dye courses at Casa de Campo in the south-east of the island. Such was the terrain with which he had to work that he claims the course has seven holes designed by God with only 11 requiring his architectural skills.

The course shares its name with the local term for the coral lying in the glittering waters lining the oceanside holes, and the natural beauty of the setting can be a real distraction. The layout is tough, though, with the most exciting holes coming in the two coastal stretches from the 5th to the 8th, and again from 15 to 17. The signature hole is the long par-3 7th over water to a green surrounded by bunkers. The local trade winds make for an even greater challenge, which thankfully, is easily outweighed by the sheer pleasure of playing in paradise.

Greece has sport in its blood and effectively founded the Olympics almost 3,000 years ago. It is also packed with history and culture. Messinia in the south-west is now home to Costa Navarino, a spectacular resort with first-class accommodation and facilities in the Peloponnese.

Bernhard Langer’s Navarino Dunes was the first golf course to open here, and this on its own would be a serious contender for inclusion on this list.

Even more attractive, however, is the Bay Course designed by Robert Trent Jones Junior, which provides a fabulous contrast running over more undulating land. It offers spectacular vistas out over Navarino Bay from most of the holes and is even more photogenic than its sibling. Two early holes run right along the beach before the course heads up and down through hills, canyons and olive groves on a thrilling rollercoaster ride. There is risk and reward all the way, and each of the six par 3s will live long in the memory.

There are five 18-hole designs on Kiawah Island in South Carolina, with the Ocean Course the best – a complete adventure from start to finish. It hosted the dramatic 1991 Ryder Cup as well as the 2012 USPGA won by Rory McIlroy. The latter will return in 2021.

Such was the commitment to finding the very best topography that the front nine lies around half a mile from the clubhouse and the back nine. Unusually, despite the vast acreage of sand, there are technically no bunkers here, but water does come into play on virtually every hole. The demanding 17th over water is where Mark Calcavecchia famously ran into all sorts of ‘unmentionable’ trouble against Monty in 1991.

Built with the benefit of the biggest budget in Swedish golfing history, the Stadium Course at Bro Hof Slott stretches to a blistering 8,000 yards from the tips. Happily, there are more forgiving alternatives at this Trent Jones Junior course, which hosted the Nordea Masters from 2010 until last year. Trent Jones has said of the course, comparing it with… well, pretty much anywhere: “The holes are longer, the greens are bigger, the course has more water and the bunkers are larger.” As you would hope, the closing four holes, which include back-to-back par 3s, offer an exciting and memorable finish.

The course at the historic club at Fontainebleau is the oldest on this particular bucket list, dating back to 1909. It was redesigned by Tom Simpson in 1920, and the beautiful, meandering tree-lined layout has staged many important tournaments.

There are two distinct nines, each boasting two short holes and two par 5s, with the front half running clockwise around the perimeter and completely encircling the back nine. Little appears to have changed here over the years and the course has a similar feel to many of Surrey’s heathland classics, with the small greens demanding pinpoint accuracy and the sandy subsoil leading to year-round playability.

One notable difference, though, is the sandstone outcrops that appear on and around a number of holes, including the reachable par-5 12th where the safe option may well be to lay up short. This is old-fashioned golf at its finest with lunch in the charming clubhouse highly recommended, and the club perfectly located for a visit to the spectacular palace nearby.

Gary Player is the third architect to boast two designs on our bucket list, but this is as different from Thracian Cliffs as can be. Leopard Creek offers safari golf with the course located on the southern edge of Kruger National Park, about 200 miles east of Johannesburg. There are numerous water features and even if you are not enjoying the golf, which would be very hard to do, there is a good chance of spotting crocodile, hippo, antelope, buffalo, or even a lion. The course is also an excellent test of golf and has hosted the Alfred Dunhill Championship every year since 2005.

Location, location, location. Some parts of the planet are just so ridiculously attractive that it would seem wrong to do anything to change them. Kauri Cliffs, in the extreme north of New Zealand, is one such place, but the resulting David Harman design is so outstandingly lovely that any golfer will be won over. It would be hard to imagine a better setting – this is simply spectacular clifftop golf. Six holes hug the precipice edge, and the views out over the Pacific and the Cavalli Islands are the stuff of fantasy.

The opening holes lead you gently through the trees up onto higher ground where the course really takes off. From the 5th onwards, there is a wonderful succession of sandy, undulating, varied and hugely enjoyable golf holes all the way to the seriously tough finish.

Once again there are back-to-back par 3s: the 14th is no real distance, playing across an unforgiving chasm with a glorious backdrop of cliff and sea; the 15th is very pretty and plays into a sheltered hollow in the dunes.

The course has a remarkably natural and unspoiled feel throughout, with your round coming to a close on an outstanding and demanding two-shotter that will test your game to the full.

Host of the dramatic 1997 Ryder Cup and many other top professional events before and since, Real Valderrama is one of Europe’s most exclusive and prestigious clubs.

With its tree-lined fairways and unusually small greens, this beautiful Trent Jones Senior course is kept in quite immaculate condition. The bunkers are deep and filled with a coarse, grainy sand that is uniform throughout, and almost every hole is bordered by cork and pine that place a premium on straight hitting.

The two long holes at the 4th and 17th are probably the most unforgettable with the former played to an elevated green surrounded by rocks, waterfalls and a pond. The dramatic 17th has decided the fate of many a tournament and runs left to right to a green fronted by a dangerous, shaved slope. Anything short will roll back into the water – just ask Tiger Woods.

The course is seldom busy and this only lends to the dizzy experience of playing golf somewhere very special indeed.